Several months ago the fellowships in the Summit Network hosted one of our gatherings called “The Vine.” I overcame my allergic reluctance to doing formal “teaching” at our gatherings and actually took a seat at the front of the room and expounded.

[Let me ramble off topic for a paragraph. Regarding my “allergic reluctance” I want to make clear that I don’t think there’s anything wrong with formal teaching. It appears the Apostles and early believers did that, too. My reluctance grows out of the presumptive importance of such things. Christendom has assumed teaching and being taught are the main attraction of Christian assembly. In our simple gatherings we’ve discovered that the Spirit often has something to say to all of us through each of us. Moreover, we’ve discovered a coherent stream of learning from week to week without the formal “sermon.” Still, I enjoy hearing an occasional “message” as much as I enjoy preparing and delivering one. I think even house churches are richer for the addition of a prepared, cogent and organized  teaching.]

Spread Your Wings and Fly … or Not?

I took the aforementioned 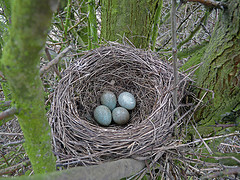 teaching out of Colossians 4 in order to address something that I had been thinking about, namely the similarity between a small church community and a nest. A nest is a place where a bird protects and nurtures her chicks in preparation for the time they are old enough to “fledge.” that is to leave the nest. It seems to me that the church community is both nest and hatchling. There are some people who provide safety and nurture. Others are growing toward taking flight.

The words I used to describe these two functions are, “Communitas” and “Expediti.”

Communitas, is a Latin term “commonly referring either to an unstructured community in which people are equal, or to the very spirit of community” — this, according to that bastion of scholarly reliability, Wikipedia. The lack of hierarchy is what prevents most institutional expressions of the church from being communitas and what opens the door for simple churches to become communitas.

The other Latin term is Expediti. According to Vernard Eller*, it means

“out of foot,” or more accurately, “freed feet,” or “those who are free of foot.” An “expedition,” it follows, is a trip taken by those who are free of foot. The term originated with the military machine that created and ruled the Roman Empire. It was used in reference to certain crack army corps, at the special disposition of the emperor, organized and outfitted to get on their feet and into action effectively and fast. The American Expeditionary Forces of World War I probably would not qualify–although they were named right. Closer to the idea are some of the Special Forces and Task Forces of contemporary military and police organizations.

It seems clear to me that both groups are necessary. Without the communitas, there is nowhere for the expediti to be sent from and without the expediti the Kingdom will not advance. Think of Paul and Phillip, expediti from Antioch and Jerusalem.

So, in answer of my question from the previous post: Yes, there is room for both the “nesters” and the ones who fly. As a matter of fact, they are both vital.

* From his essential book, The Outward Bound.”