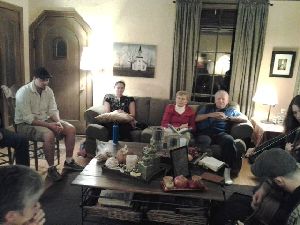 Dinner – We shared one thing that made us laugh or gave us joy this past week.

Communion – Andrew shared why he and Abby were absent last week. A woman, clearly troubled, got into their shed, yelling and being violent. After calling the police and them taking her away, Andrew wished he had more knowledge to know how he should have responded (how to pray, etc). Andrew felt God respond, “You don’t need to know more. You need to know Me more.”

David W followed, (and I apologize, I’ve forgotten the context), with sharing something God spoke to him recently, “I’m not here to make it right for you, but to walk with you.”

Ben read John 6:32ff, the passage about needing to eat Jesus’ flesh and drink his blood. I prayed, connecting the passage about that it is not what goes into a person that makes him unclean, but what flows out—that as we remember Jesus’ sacrifice in eating and drinking, that more of Him would flow out of us.

David W shared how earlier in the night, Sheri leaned over and out of the blue said, “The next time you go to Kenya, I want to go with you.” He had thought that season of life was over for him. But it was very clear that Jesus was speaking directly to him, through Sheri. Terri said that for her, it had always been the question of when he was going back, not if.

Our DERP (debt reduction program) and our response to the economy of the Kingdom was brought up. I had been wondering this week who we were going to bless next. As David W was speaking, both Andrew and I thought maybe the “Send David W to Kenya” fund was next. David W was taken aback in a good way that that would occur to us. We all asked David W some practical questions. It would take about $5,000 for David W to go (so $10,000 with Sheri). It was noted that our first DERP was $5,000 and we paid that off in three months. David W is having some surgery later in this year, so a trip couldn’t be until the new year. Also, David W has his dad to think about, as he was in Kenya when his mother died, and he does not want that to happen with his dad. Sheri responded to each point that Gods not in any hurry! i.e., it doesn’t have to happen in the next six months.

Next, Heidi read 1 Chronicles 12:38-40. She was struck by how God gave abundant provision when they went to make David king, and that they were of one mind. She paralleled that to having one mind to making Christ king. We talked about other aspects of the passage. There are two groups, the mighty men, and the people of Israel (three northern tribes, at least). That the mighty men personally knew David, whereas the people might not have. Focusing on the mighty men, they knew David because they were in combat with him, bled with him, and shared in his suffering. Ben pointed out that that’s how we come to know Christ, by sharing in his suffering.

I shared Proverbs 3:3 which stood out to me this week. The command to “Let not steadfast love forsake you.” God is steadfast love, and He promises not to leave or forsake us. So this is an interesting command. It’s also interesting, because you generally don’t think about being able to influence if someone else forsakes you—that’s generally thought of as a one way thing. But I noticed how I could get lazy, that Jesus’ is not going to forsake me, so I might then slack off in chasing him. And hence the wisdom of the command. Sheri shared how vs4 is the exciting part—the result of finding favor in the sight of God and man!

Tim shared that he’d been pondering Luke 19:11-27, particularly the odd details at the beginning and end, about the nobleman receiving a kingdom, and then executing those who opposed him. (This bookends Luke’s version of the servants and the talents parable.) He was seeing a connection with (or it was brought to mind by) 1 Chronicles 12:38-40 shared by Heidi. David was made a king because people knew him, but in this parable, there are people who do not want the nobleman to be made king. And they were executed. Ben tied it to the sermon on the mount, where there are people doing all these “Christian” things—casting out demons, healing the sick, etc—and Jesus says He never knew them. Dave C commented how we don’t need to just do good things, but Christ needs to be seen and made known through our actions. It’s empty otherwise.

Terri shared how very blessed she was and how she kept reflecting on what the Spirit did earlier between Sheri and David W. That quiet Sheri shared with David W, and he recognized the Holy Spirit. She was blessed by the quiet power and how very present God is. Without being flashy or loud, God is effective and present. She said that gave her great hope for her “monotonous” life. She didn’t see herself doing anything big and loud, and yet Jesus could be known in her life, too.

Sheri asked for prayer for her friend Vanessa, who she has mentioned previously. Vanessa is in Texas, and is struggling with health issues. Her husband is still in Iran, but scheduled to leave September 26th. He is also still trying to sell his commercial property in Iran before he leaves. The concern with her husband is that he’s had a few days when he was scheduled to leave, but he has been hindered. In prayer, Heidi read Psalm 20.

I brought up something that Heidi had prayed during worship. She had thanked God for how she knows him experientially, not just what she knows about him—specifically that He is patient. I (and Heidi) wanted to ask how everyone else most knows God.

–Sarah – God’s steadfast love
–David W – That greater is He that is in me, than he that is in the world. David finds that he is not afraid, but at peace. (Often counter-culturally at peace!)
–Stephen – God is provider, and very kind
–Patricia – God is my hope, God is victorious. He is understanding, patient—and that gives her hope.
–Kelly – God’s kindness and goodness, and being able to trust in Him
–Tim – Life, He is life. Passage, as you draw near to God, He draws near to you. Tim finds as he draws near to God, life is more vibrant, comes alive. (Tim said this better!)
–Ben – God is good. His goodness transcends my circumstances and overrides my need for answers. [selah]
–Dave C – Peace, shalom, wholeness, completion. And in knowing God, there is deeper peace.
Following Dave C, David W commented that when the rubber meets the road, his 3am fretting hour, that’s where he has to live what he believes! There can be a tension with peace. Ben noted that that’s were we get pushed to abide in Him, and where we learn actually how to abide.
–Kristy – God shows up. Faithfulness. The moment when she’s not sure what could happen, He shows up.

Terri proposed something she’d like to try. She had heard of a group that meets once a week and read a passage of scripture that stuck out to them that week. They don’t explain, or expound, but just read the passage. She was struck by how that group very often sees a theme. She sometimes feels like she has a piece, but not the whole picture. There was general consensus that that was a good idea, and we agreed to do that for next week. She also pointed out how it would be a good way to get comfortable and practiced in sharing what we hear from the Holy Spirit.

And we’ll also be better about putting out the offering jar.