It’s Tuesday night around 6:00. One by one, people, some singles, some families show up at a house on a street like yours. The dining room table is set with paper plates and cups. There’s coffee brewing in the kitchen. You can smell it. The guests seem at home as they congregate in the kitchen and living room. The kids are playing among the adults. There is a sense of unstructured cordiality.

A couple comes through the front door. The man carries a large pot of something and his wife is toting two grocery sacks containing three loaves of French bread and a bag of green salad. The meal for the evening has arrived: soup, bread and some salad. Simple, but satisfying. Behind the meal bearers, another young couple appears with a friend, a single woman from the wife’s work. The new woman is introduced to a few of the guests in the living room including a man who is tuning his guitar on the couch.

The owner of the this home comes into the living room with a mug of de-caf, introduces himself to the newcomer and invites her to the kitchen for coffee or tea and to introduce her to his wife. She seems a little nervous, but everybody she meets seems friendly so she begins to relax.

Come and Get It! 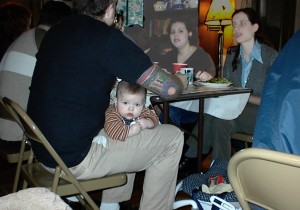 Before long, everyone is gathered around the table. One of the children gives thanks for the food. People begin passing their bowls to a lady who is ladling the soup while a plate of French bread and a bowl of salad makes its way around the table. The group settles down to eat. One of the men asks, “Who’s got good news?” Conversation around the table proceeds amidst the passing of the salt and butter and salad dressing.

After supper everybody helps clear the table and rearrange the chairs for a gathering in the living room. Eventually, the guitar starts to make some recognizable sounds and a few voices are heard picking up the melody of a praise chorus. People begin to migrate into the living room. Somebody hollers down to the family room for the kids to join the group.

The first couple of songs are “kid songs” complete with hand motions. The third song ends and someone leads out in prayer. After a couple of sentences, one of the kids starts fussing. Mom gives her a stern look, sits the little one down with a book, and looks embarrassed. The prayer continues. Another song starts. It sounds awful. Wrong key. Everybody laughs and they start up again.

A few minutes later, one of the members of the group, who had slipped out earlier, comes in the front door with a teenager who comes to watch the children every week. The kids flock to her and follow her down to the basement, leaving the adults to spend time together.

The pattern is pretty random. A few songs. Somebody leads in a prayer. A lady shares a few verses in Psalm 34 and tells why they are important to her. A discussion about dealing with fear, shame and trouble begins. Eventually, a man asks for prayer concerning a halfway house for drug abusers that is starting in the city. Drug and alcohol abuse seem to be a real area concern for these people. Apparently a few of the members of the group are former users. Somebody suggests that they all get together and help paint the halfway house and work on the repairs. The man who made the prayer request says that he will see what needs to be done and let everyone know next week.

Somebody remarks about the time the group got together on a Saturday to distribute flyers for a treatment program and then met in the park and had a picnic. The group had apparently had a good time. One of the group, who apparently is a leader, although he has not been particularly obvious, begins reading from one of the gospels. He comments about his own difficulty with applying what he just read. The group is used to putting in their two cents and a discussion begins. It ends in about fifteen minutes as a few people ask for prayer. The group gathers round and lays hands on these and pray.

Communion and Winding Down

Meanwhile, the hostess has slipped into the kitchen and now reappears with a cup of grape juice and some bread. The elements are passed. Someone reads from 1 Corinthians 11. The group shares the Lord’s Table.

It’s almost 9 PM, and nearly time to close. A woman reminds everyone that there is a box on the dining room table for any offerings for childcare or other ministry that the group is involved with. As people leave a few drop in checks or bills.

A single guy heads for the door saying that he has to be at work early tomorrow. Several tell him goodbye while another guy walks out to the car with him. They are still talking ten minutes later.

Things are winding down. The parents are rounding up the kids. Before long there are two couples standing around the front door. They are the only ones left besides the hosts. They are talking about some mutual friends who used to be a part of the group, but are now hosting another group a few miles away.

That “simple church” meets on Thursday nights and is still relatively small, maybe four couples and three singles that got started because the group that met Tuesday evening had outgrown the house and because several people had decided that they wanted to work with a crisis pregnancy center. Members of the new group had gotten to know some teen mothers while helping in a high school treatment program and so the move from drug and alcohol ministries to crisis pregnancy and abortion issues seemed a logical one. Two teen mothers are actually a part of the new group.

The two couples head for their cars. As the host couple closes the front door. Tuesday simple church is over for another week. Tonight, though, two family dinners, one camping trip, a before-work breakfast, and a Saturday lawn-mowing party were set up among the members. In three weeks, as many as can, will put on their grubbies and show up at a drug rehab facility for a three hour work party. At around noon two of the ladies from another group, who enjoy hospitality, will bring over some sandwiches and sodas for the workers. About eight people will be showing up and they are looking forward to it.