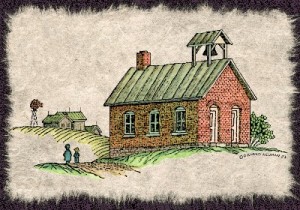 From Little Town on the Prairie

The town folk were very bored and wanted some fun, so they decided to have a literary society… The seats were filled and men were standing thick behind them, when Mr. Clewett called the room to order. He said that the purpose of this meeting was to organize a literary society.

Everyone was a little taken aback, and felt less jolly, but it was an interesting question, who could be elected President. Then Pa stood up by his seat, and said,

“Mr. Clewett and townfolks, what we’ve come here for is some fun to liven us up. It does not seem necessary to organize anything. From what I’ve seen,” Pa went on, “the trouble with organizing a thing is that pretty soon folks get to paying more attention to the organization than to what they’re organized for. I take it we’re pretty well agreed right now on what we want. If we start organizing and electing, the chances are we won’t be as well agreed on who’s to be elected to fill office. So I suggest, let’s just go straight ahead and do what we want to do, without any officers. We’ve got the schoolteacher, Mr. Clewett, to act as leader. Let him give out a program, every meeting, for the next meeting. Anybody that gets a good idea can speak up for it, and anybody that’s called on will pitch in and do his share in the programs the best he can, to give everybody a good time.”

“That’s the ticket, Ingalls!” Mr. Clancy sang out, and as Pa sat down, a good many began to clap.

Mr. Clewett said, “All in favor, say ‘Aye!” A loud chorus of “Ayes” voted that it should be so. Then for a minute, no one knew what to do next. Mr. Clewett said, “We haven’t any program for this meeting.” Some man answered, “Shucks, we aren’t going home yet!” The barber suggested singing, and someone said, “You got some pupils that can speak pieces? How about it, Clewett?” Then a voice said, “How about a spelling match?” Several chimed in to that, “That’s the notion!” “That’s the idea! Let’s have a spelling match!”

And so every week, everyone brought what they had to entertain the others and fun was had by all…

Does being the church have to be much different than this?