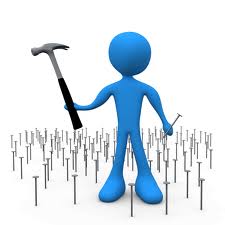 I can’t remember where I first heard this aphorism, but it has proven to be very helpful as I consider small group church life. Here’s the phrase, also known as Maslow’s Maxim:

To him who only has a hammer, everything looks like a nail.

I remember a brother who lived with us a number of years ago. We were discussing his gifts and callings and he said in all earnestness, “I am a problem solver.” I believe he was. I recognized him as having an observant, analytical mind that was well suited to figuring out how to untangle a mess and to implement a plan of “disentanglement.”

He was skilled in many areas, but this one was prominent. Problem solving was his hammer.
But the trouble with hammers—whatever shape your hammer may take—is that you tend to feel bored and useless if you can’t find a nail to drive. What that meant for my problem-solving brother was that, to feel fulfilled, he needed a problem to solve. Indeed, he was ever on the look-out for them.

To live with a problem solver on the hunt for problems was a frustrating experience because he generally found them—whether anyone else thought they were a problem or not. That translated into a relationship characterized by criticism and defensiveness.

In the church, people have all kinds of hammers. They tend to be on the lookout for a nail to whack with it. The whole church can look like it needs a good pounding.

I get calls from people who confidently announce that they are teachers. When they show up for a gathering, they often want to teach, and just as often, they may be oblivious to what is going on in the moment because they are looking for the nail. The seekers of pure truth show up with their orthodoxy hammer, waiting to take a swing at the next unbiblical nail that raises its head. Others carry a healing prayer hammer, a deliverance hammer, a prophetic hammer—all looking for the nail.

The result is the group may feel patronized by the teacher; accused by the truth seeker; self-conscious in the presence of the prophet and tempted toward paranoia as the deliverance specialist looks for the next demonic nail.

Paul’s counsel regarding the body of Christ in 1 Corinthians 12:14-21 hits the nail on the head (if you’ll pardon the expression):

As for those of us who are trying to navigate the organic life of simple church, we all need to acknowledge that we have our hammers, and resist the temptation to see nails where there are none. Moreover, when visitors come into the group, it is good to discern if they come with a hammer looking for a nail or are coming as a brother or sister looking for fellowship. As difficult as it may be, if new people in a fellowship are unwilling to lay down their agenda (metaphorical hammer) it is better to graciously suggest they move on.

One thought on “To him who has a hammer….”