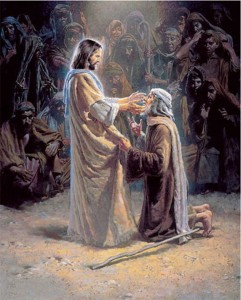 Lasting relationships. That’s what we hope for in a Summit Fellowship. We want to be a part of a community of people that we can count on, enjoy one another’s company, see each other’s children grow.

It doesn’t always work out that way. In truth, whole groups sometimes come apart and don’t survive as a group. But even the ones that survive experience loss. There is nearly always coming and going — some people who stay, some who leave.

There are good and bad reasons for that. One of the the good ones is healing.

Simple churches, by nature, are healing communities. They are places where damaged people can come and be received, heard and loved. Whether a sister comes from a painful church experience or a brother from a broken relationship, a small fellowship can be a “soft place to land.” Whole families may find their way to a small church to pick up the pieces after a difficult season.

The appearance of new people in a Summit Fellowship is nearly always encouraging to the group. New relationships add a spark that ignites renewed passion and excitement. Friendships emerge and the community is refreshed. Underneath the excitement, though, lies a question: are these friendships for a reason and a season?

One Summit Fellowship recalls a couple who came to the community from out of the area. They had come from an exhausting ministry experience and, by their own admission, they were tired, even a bit cynical. They were relieved to find a place of fellowship to call home where they could rest and recuperate. It wasn’t long before they were thoroughly woven into the church family. Birthdays were celebrated, children were cherished, friendships forged, and covenants assumed.

Then, years later and seemingly without warning the “new” couple announced they were moving on. This was their last week.

The reasons were not clear. Nobody was mad. There had been no offenses. It just seemed it was time to go and find new fellowship.

What happened? Apparently, the church had, unknowingly, been a healing community. The family had come and rested — recovered — and then, without even realizing it themselves, had become strong enough to want to move on. Though everyone involved continued to be friends, they no longer saw each other regularly. The “new couple” found a more traditional congregation where some friends from work attended, and the relationships drifted apart.

Those who remained, admitted they were hurt. It felt like a hole had been left in the fellowship. It was hard not to feel rejected. They had assumed that the relationships in the community were more important than they apparently were. It took some time to heal.

This is one of the challenges of the simple church. When people draw close enough together to grow and know each other well, the potential for pain increases. One cannot love without the risk of pain. Even when groups members part ways for more or less positive reasons, the pain of separation is nonetheless real. Still, a fellowship could do worse than be a healing community.